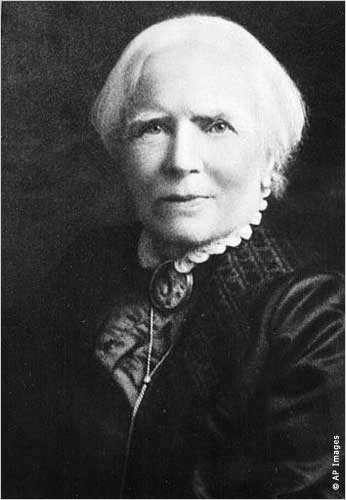 My scientist is Elizabeth Blackwell. She was born in Bristol,
England on February 3rd, 1821. In 1833, Elizabeth and her family moved to the United States where she would eventually begin her medical career; she is most known for being the first female doctor. Her father, Samuel, owned a sugar refinery, and her mother, Hannah, introduced the children to music and literature. Her parents disagreed with public schooling, so Elizabeth and her siblings were taught by private tutors; both boys and girls were taught the same subjects. This may have played a role in Elizabeth’s ambitious goal of pursuing a career held by primarily men: medicine.

Elizabeth Blackwell was a pioneer for women in the medical field; she was the first woman to obtain a medical degree. She was accepted to Geneva Medical College and graduated in 1849. She is also the  first woman to appear on the United Kingdom medical register. Some of her other achievements include the foundation of the New York Dispensary for Indigent Women and Children, with her sister Emily, in 1853, and the New York Infirmary and College for Women. In addition, she established the US Sanitary Commission, and is the author of several books. Elizabeth died in Hastings, England on May 31st, 1910.

What interested me most about Elizabeth Blackwell was that she
was a physician. Doctors, even today, are often portrayed by men, and women are seen more as nurses. I myself have considered becoming a nurse, but I never really thought of becoming a doctor (not because I didn’t think I could). Funny enough, Elizabeth never considered a career in medicine herself. One of her friends suffered from a reproductive disorder and told Elizabeth that it would’ve been easier for her to seek treatment had she had a female doctor. It was then that Elizabeth began to invesigate the idea and after consulting many male physicians, who believed the idea was good but impossible for a woman, she accepted the challenge (Pioneer Work in Opening the Medical Profession for Women).

I think Elizabeth Blackwell is a great role model for budding scientist, espcially girls. She displays the idea of equality, in that she recieved the same education as her brothers and challenged herself to do what men told her was impossible for women. She proved that women are just as capable as men. She was an experienced educator and used that skill to teach and train other women to become medical professionals at the college that she established for women. I think she would suggest a person considering a career in science to not be afraid of a challenge or to go when others have not gone before them.

Here’s a link to Elizabeth’s book, Pioneer Work in Opening the Medical Profession to Women. I’ve read a few of the pages and it’s really interesting to see what exactly was going through her mind while she achieved all the things she did. Clink “Preview this book” to read it online. http://books.google.com/books/about/Pioneer_work_in_opening_the_medical_prof.html?id=i0kPAAAAYAAJ

One Response to Elizabeth Blackwell